Understanding how neutron stars look like on the inside, i.e. what their structure is and what they are made of, is one of the main challenges of modern astrophysics. There are several different ways through which we try to unravel this. One avenue is to measure how the temperature of neutron stars evolve after they have been eating.

Humans gain energy by eating and so do neutron stars. The meal of a neutron star consists of gas that is supplied by a companion star. By consuming this gas, the outer layers of a neutron star get heated up. Once they stop eating, this gained energy is  radiated away and therefore the neutron star cools down again. How hot neutron stars become during their dinners, and how quickly they cool afterwards, depends strongly on their interior properties.

We use sensitive X-ray telescopes to measure how the temperature of neutron stars evolve after they have been consuming gas from their companion. Such studies have revealed that many neutron stars are much more strongly heated during their dinners than is predicted by theoretical models. This is referred to as the shallow heating problem, because the heat appears to be generated just below the surface of the neutron star. It has puzzled us for over a decade now where this shallow heat comes from.

In a previous study, we proposed that the well-known neutron star X-1 in the constellation Aquila, aka Aql X-1, could provide the key to unravel the mysterious source of shallow heat. This neutron star feasts off its companion about once a year and its heating and cooling can thus be studied and compared after multiple dinners.

Using the Chandra and Swift satellites, we studied Aql X-1 after three meals (in 2011, 2013 and 2016) that were very similar. Since the neutron star consumed approximately the same amount of gas during these three episodes, we expected that it would have been heated to similar extend and hence cool in the same way. However, we found that the temperature of the neutron star was strikingly different after its 2016 dinner than after the other two. Within our current understanding of heating and cooling of neutron stars, it is very difficult to understand why its temperature should be so different.

Instead of unraveling the mysterious source of shallow heat, our dedicated study of Aql X-1 seems to have further complicated the picture. We thus have to go back to the drawing board to think of a new experiment to find out what causes the shallow heat inside of neutron stars. 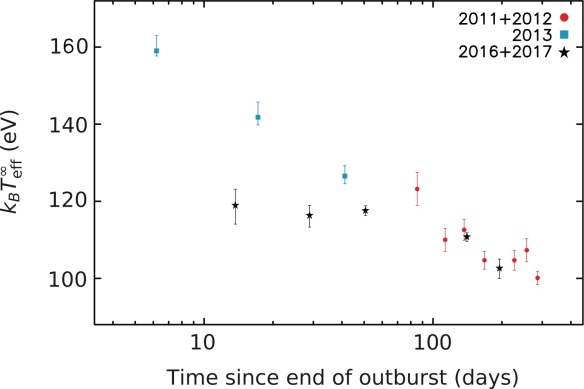