Since the dawn of X-ray astronomy over 50 years ago, more than 150 neutron stars swallowing gas from a nearby (Sun-like) companion star have been identified in our Galaxy. Still, every year a few new neutron stars are discovered when they suddenly start to devour their unfortunate neighbours. Different telescopes and satellites are then used to characterize such a previously unknown X-ray binary.

In February 2015, the X-ray emission of an object named 1RXS J180408.9-342058 was suddenly found to have brightened by more than 3 orders of magnitude. It was known to be an X-ray binary since 2012 when it displayed a thermonuclear X-ray burst; a devastating burp from a dining neutron star. At the time, however, it seemed that the neutron star was only taking a mid-night snack and had gone back to sleep before we could point our telescopes to investigate its eating patterns. Luckily, when it awoke in 2015 the neutron star clearly had much more appetite and kept swallowing gas from its companion for several months. This provided ample opportunity to study it in high detail.

We used three different X-ray satellites, namely NuSTAR, Chandra and Swift, to chart the geometry of this X-ray binary and the table manners of its neutron star. NuSTAR is a particularly powerful tool to study X-rays reflecting off the gaseous disk that surrounds and feeds the neutron star. Leveraging this, we determined that we view the binary at an angle of about 30 degrees, and that the gas disk was extending very close to the neutron star. In turn, this shows that the neutron star’s magnetic field is relatively weak and not able to keep the accretion flow at a distance. With Swift and Chandra we collected X-ray data when 1RXS J180408.9-342058 was at its brightest, and this suggested that the neutron star was eating rather messy; hints of narrow absorption lines suggest that part of the gas flowing towards the neutron star was blown away in a disk wind. 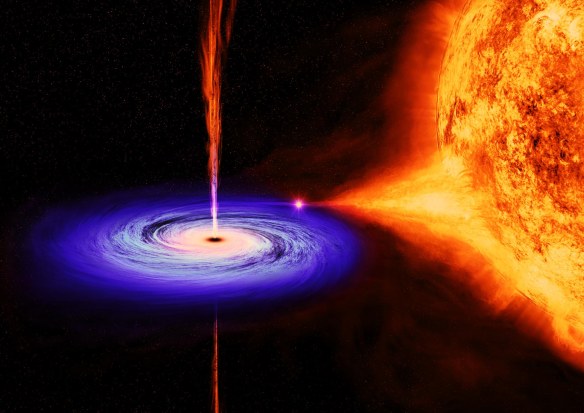