Neutron stars are one of the possible end products of the stellar life cycle. These objects are the compact remnants of once massive stars that burned all their fuel and consequently collapsed under their own gravity and exploded in a supernova. One can thus say that neutron stars are ‘dead stars’: they have no internal resources to replenish the energy that is lost via photons emitted from their surface and neutrinos escaping from their interior. When left alone, neutron stars would therefore slowly fade away over the course of millions of years. However, a neutron star can escape this fate when it is a member of a binary system: it can then regain energy by pulling off and accreting matter from its accompanying star (it can suck life out of its companion, so to say).

Accretion causes a complex network of nuclear reactions inside the neutron star, at a few hundred meters below its surface. These reactions serve as an effective energy supply. When the neutron star is done accreting, however, it will immediately start to loose energy again. Using sensitive X-ray telescopes and dedicated observing techniques, the signatures of these processes can be detected: the temperature of a neutron star rises during accretion episodes but then gradually decreases afterward. In particular, a detailed mapping of the ‘cooling curve’ of a neutron star can give unique insight into its tantalizing interior structure, one of the basic quests of neutron star research.

These cooling studies cannot be carried out for just any neutron star: in order to create detectable temperature differences, a neutron star must be very cold to start with, and/or accrete (i.e., be heated) for a long time. EXO 0748-676 is one of the few sources for which such a study could be carried out. This neutron star started accreting some time between 1980 and 1984 and happily continued to cannibalize its companion star until it suddenly stopped in 2008. We seized this rare opportunity to study a cooling neutron star and embarked on a monitoring campaign using the sensitive Chandra, XMM-Newton and Swift X-ray satellites.

Our X-ray observations revealed that EXO 0748-676 harbors a relatively hot neutron star, as expected given its long history of feasting on its companion. During the first year after it stopped accreting, its temperature was gradually decreasing indicating that the hot neutron star was cooling. However, between 2009 and 2011, we did not detect any significant temperature change any more. To verify that the neutron star had indeed stopped cooling, we obtained a new Chandra observation in 2013. Surprisingly, this new data point showed that the temperature had dropped again, indicating that cooling is ongoing. Excitingly, the apparent plateau of stalled cooling in 2009-2011 could be the result of a chemical process in which light and heavy atoms separate out in different layers.

If this process indeed occurs, it would suggest that the crust of neutron stars has a very ordered, strong structure. That has important implications for several observational properties of neutron stars, including the emission of gravitational waves from deformations in their structure. This result on EXO 0748-676 nicely illustrates how astronomical observations can be used to probe micro-physical processes occurring in the dense interior of neutron stars. 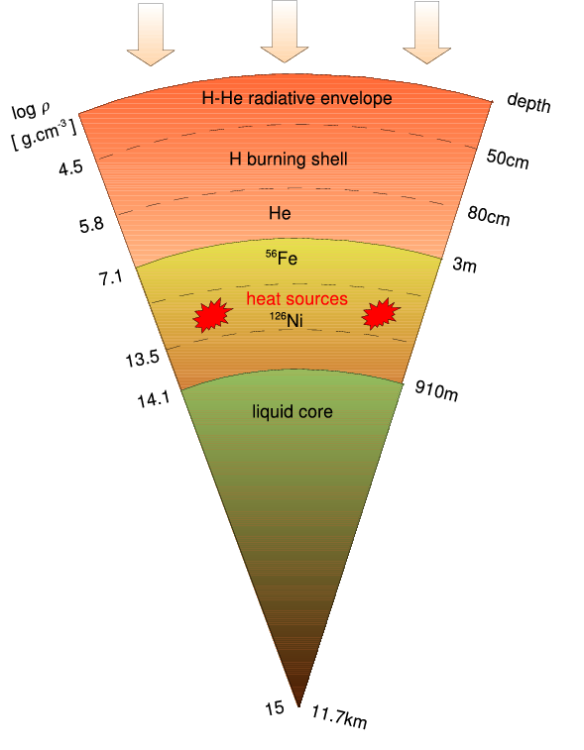