Black holes and neutron stars are notorious for swallowing gas from their surroundings. However, these extreme objects also spit large amounts of matter and energy back into space via collimated streams of gas that are called jets. These jets emit radio emission that can be detected with large radio telescopes such as the Australian Telescope Compact Array (ATCA) that is located in Australia. Black holes seem better at producing jets, since their radio emission is on average a factor ~10 brighter than that emitted by neutron stars.

In 2018 August, the X-ray telescopes orbiting the Earth detected a new X-ray source in the Sky that was named IGR J17591-2342 (after its position in the Sky and after the telescope that discovered it, ESA’s INTEGRAL mission). Within a few days after this discovery, we observed this new X-ray source with ATCA, to investigate if it was producing a jet. We detected such bright radio emission that we suggested that this object was likely a black hole. However, a pulsed X-ray signal was detected from IGR J17591-2342; such a signal requires an object with a solid surface and therefore rules out that this source contains a black hole. The detection of X-ray pulsations instead showed that IGR J17591-2342 contains a neutron star, spinning at a dazzling rate of 527 rotations per second, that is swallowing gas from a nearby companion star.

The distance to the new X-ray source IGR J17591-2342 is unknown, but its X-ray emission is strongly absorbed by interstellar gas, which would suggest that the source is relatively distant. For distances larger than 3 kpc, the radio brightness of IGR J17591-2342 is very similar to that of black holes and much brighter than that of neutron stars. It is not yet understood why this neutron star is able to produce such a bright radio jet. 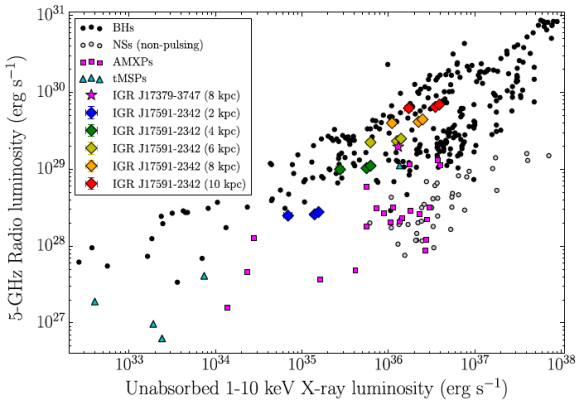 Radio and X-ray luminosities of a large collection of black holes (black circles) and different classes of neutron stars (grey circles, pink squares and cyan triangles). The location of IGR J17591-2342 in this diagram depends on its unknown distance and is indicated by the different coloured symbols. Unless the source is very nearby (less than 3 kpc), it is unusually radio bright for a neutron star.