The laws of physics dictate that there is a maximum amount of food that neutron stars and black holes can digest. Once you reach the so-called Eddington limit, the radiation that is produced by the consumption of gas becomes so strong that it blows away the in-falling material. Theoretically, it is therefore predicted that if you overfeed a neutron star or a black hole, strong outflows are produced: in the regime of super-Eddington accretion, we expect both jets and winds to be created. Jets are usually detected at radio wavelengths, whereas winds often reveal themselves as narrow absorption lines in high-resolution X-ray spectra.

There are a number of neutron stars and black holes identified that are likely accreting at very high rates. Most of these are located in other galaxies, and referred to as ultra-luminous X-ray sources (ULXs), because the high rate of food consumption makes them very bright X-ray emitters. For several of these ULXs, signatures of disk winds have been detected. A few other ULXs have radio bubbles around them that suggest that these objects are producing strong jets. However, to date there is no ULX known that is known to produce both winds and jets at the same time. It therefore remains to be established if super-Eddington accretion indeed causes both types of outflows.

Swift J0243.6+6124 is an accreting neutron star that is located in our Milky Way galaxy and was discovered in late 2017 when it suddenly started to feed of its companion star. Following its discovery, the object kept brightening until after a few weeks it reached super-Eddington accretion rates. We previously detected a jet from this neutron star using the Very Large Array (VLA) radio telescope. Following this detection, and known that the source was in the super-Eddington regime, we also requested high-resolution X-ray observations with the Chandra telescope with the aim to search for the presence of a disk wind.

Detecting a disk wind in Swift J0243.6+6124 was not an easy task because it was so overwhelmingly bright that it was causing issues for all X-ray satellites: just as the NS cannot eat fast enough, our X-ray detectors couldn’t process the light received from the source fast enough. Luckily, Chandra could be operated in a very special setting that allowed us to look at the source anyway. Excitingly, the spectra that we obtained with Chandra contained a number of narrow absorption lines that can arise from a disk wind. The properties of these absorption lines suggest that the wind is blown away from the neutron star at a dazzling speed of 20% of the speed of light: a speed of about 200 million kilometers per hour! Similar wind speeds have been measured for ULXs in other galaxies.

Our Chandra and VLA observations thus revealed that indeed jets and winds are produced at the same time in the super-Eddington accretion regime, just like theory predicts. 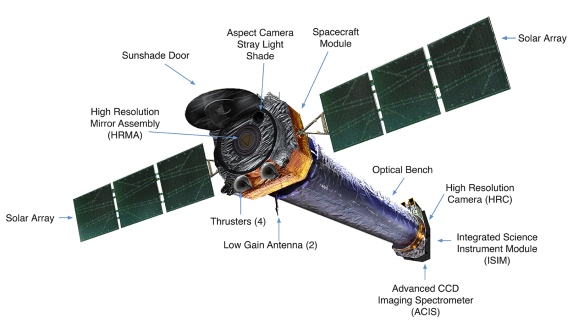 Schematic overview of the Chandra X-ray satellite, with which we performed this research. Image credit: NASA