Thermonuclear X-ray bursts manifest themselves as intense flashes of X-ray emission that have a duration of seconds to hours, during which a total energy of approximately 1039 to 1042 erg is radiated. These events are caused by unstable thermonuclear burning that transforms hydrogen and/or helium that has falling onto the surface of a neutron star into heavier chemical elements. X-ray bursts are a unique signature of neutron stars in low-mass X-ray binaries. In such interacting binary star systems, a Roche-lobe overflowing late-type companion star feeds matter to the compact object via an accretion disk.

IGR J17062-6143 is an X-ray source that was discovered in 2006, but remained unclassified until the Burst Alert Telescope onboard the Swift satellite detected an X-ray burst in 2012. This unambiguously identified IGR J17062-6143 as a neutron star low-mass X-ray binary. But not just any ordinary neutron star. The X-ray burst was highly energetic (classifying as a so-called intermediately long X-ray burst), and displayed three very unique features that indicate that the explosion was violent enough to disrupt the accretion disk surrounding the neutron star.

Firstly, the 18-min long X-ray burst displayed dramatic, irregular intensity variations that were clearly visible in the X-ray light curve. Similar fluctuations have only been seen on a handful of occasions. They are likely caused by swept-up clouds of gas or puffed-up structures in the accretion disk. The time-scale of the fluctuations suggest this gas is located at a distance of approximately 103 km from the neutron star. Secondly, the X-ray spectrum of the X-ray burst showed a highly significant emission line around an energy of 1 keV (most likely a Fe-L shell line). This emission feature can be explained as irradiation of relatively cold gas. The width of the line suggests that this material is located at a distance of 103 km from the neutron star. Thirdly, significant absorption features near 8 keV were present in the X-ray spectrum (in the Fe-K band). These likely result from hot, ionized gas along the line of sight. Fitting these features with photo-ionization models points towards a similar radial distance as inferred from the emission line and the light curve fluctuations. Spectral emission and absorption features have never been (unambiguously) detected during an X-ray burst, making this a highly exciting discovery.

In conclusion, three independent observational features suggest that the energetic X-ray burst from IGR J17062-6143 swept up gas along our line of sight, out to a distance of roughly 1000 km from the neutron star (approximately 50 gravitational radii). This provides strong evidence  that powerful X-ray bursts can indeed disrupt the (inner) accretion disk. 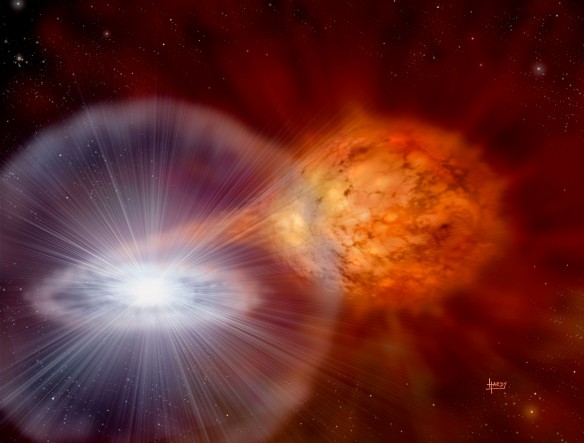 An artist impression of an interacting binary.
Image credits: David. A. Hardy / STFC